I’ve spent the last few years trying to figure out Twitter. It was a clique that I couldn’t quite break into, so I mainly used it as a source of news and comic relief. Eventually I discovered that there were creative people on Twitter who offered inspiration, but not the bland quotation type of inspiration from a long dead guru or politician, but a modern kind of inspiration using technology to cross all the boundaries of “art,” with comics protesting for civil rights, artists debating politics, poets speaking for LGBT Pride, and composers writing raps about history.

Since I have started “showing my work” (in the words of Austin Kleon), sharing my drawings and paintings with people outside of my own house, I have occasionally put a drawing up on Twitter without much reaction, since most of my followers are spammers trying to get a follow back or family members who opened a Twitter account and never came back. But it’s what I have to offer so I keep offering.

Recently I was scrolling through tweets and I came across one that might as well have been a billboard in my livingroom, flashing neon lights in my face. It was written by @jonnysun, “a playwright, an artist, an architect, an engineer and a designer,” according to NPR, who plays an alien on Twitter with 164K followers. He is a force of good on social media, poking your brain in ways you never imagined. Here’s what it said:

My brain said “Engage. Now. He’s talking to you.”

My latest series of portraits was inspired by a selfie taken by my 15-year-old daughter, @LoL_its_dyl. This is my colored pencil version: 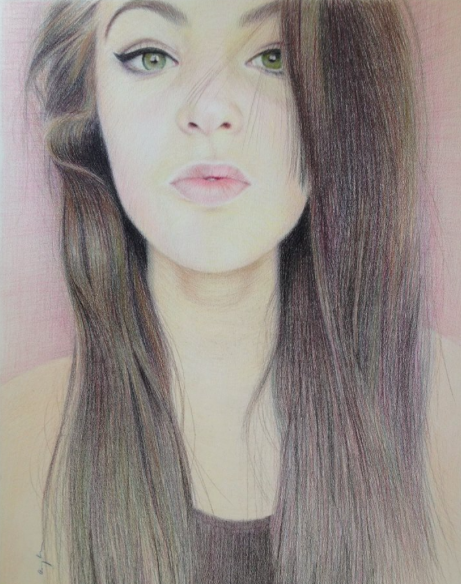 In the process of working on it I realized that selfies have brought self-portraits to the masses. No need for years of art school, a smartphone was all that was required. She let me dig through her Instagram feed for inspiration from her friends and I began to compile a collection of my favorites. With lots of enthusiasm and permission from her friends, I began with “Jared” in colored pencil, followed by “Sophia” and “Charlotte” in pastel.

This is how I replied to @jonnysun: 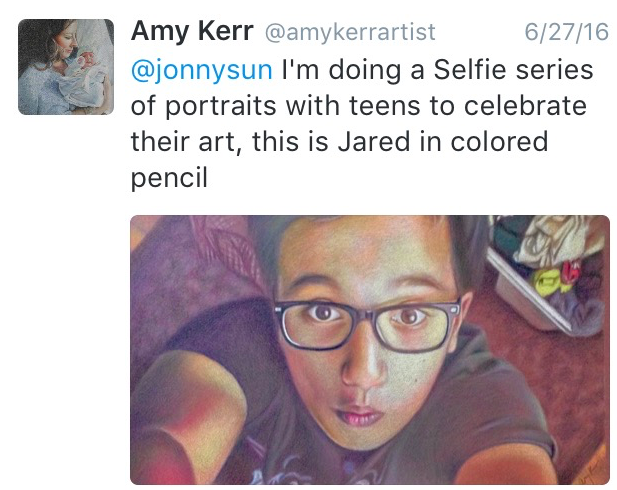 Then I went out for the afternoon to do errands.

When I got home I was surprised to see my Twitter Notifications lit up and when I clicked on them I saw this: 1. @jonnysun had liked my reply and 2. @jonnysun had retweeted my reply. For the first time my work was seen by actual interested people out there in the world, beyond my family and friends. They liked it (224 times), they retweeted it (16 times), and they replied to me (“whaaaat this is awesome”). Not only did they like this tweet, they liked my other tweets, and other portraits, and blog posts. Mission accomplished, right? Well, there was more.

One of the replies said “@amykerrartist how can I get involved?” It took me a minute to realize what she meant by this. She wanted to know if I would do a selfie portrait of her. Huh. It had always been my intention to work with friends of my daughter whose styles and personalities I knew. I decided to look at her photos, be encouraging, but politely decline. I scrolled through her photos and found them refreshingly sweet and bubbling with joy and affection. And then, as it so often happens, one stopped me short. It was a scene I was very familiar with–the Stagedoor Selfie. I have spent a good many hours of my life at theater stage doors with my daughter in the heat, in thunderstorms and pouring rain, and in crushes of people, waiting for her idols to emerge. The usual result was an obligatory arm on the shoulder and rehearsed smile (except for @ABrightMonster who mixed it up a bit):

I recognized the format, but the result was of THIS meeting captured in a selfie was the perfect fan/idol encounter:

This was an essential part of the selfie story. Without hesitation I replied to her and asked permission to use her photo as a reference for the series. In return I got the standard reply from people whose permission you ask to do a portrait of them: “OF COURSE.”

So thank you to Jonathan Sun, Lin-Manuel Miranda, Cameron Esposito, Sarah Kay, Sophie Ploeg and all the others who create and share and keep the rest of us going, and especially to Jared, Charlotte, Sophia, Dylan and @queen_fem for sharing yourself with the world on your own terms.

One thought on “A Funny Thing Happened on Twitter”