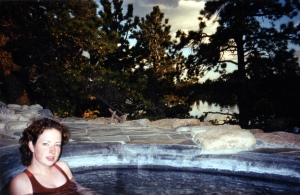 Scene I: June 1999, Gold Lake Mountain Resort. After six years of boats and whales, living in a chicken coop, and restoring a barn, we are spending our honeymoon at a spa (my choice). It’s been six years of waiting for Iain’s green card to come through so we could get married without doubts, and now it’s time to start a family.

Scene II: Twenty weeks later, Emerson Hospital Radiology. We’ve been sent back to the waiting room after the ultrasound. We’re supposed to be on our way home with pictures to stick on the refrigerator, but we’re waiting because the baby’s bladder refuses to fill up. They need to see the bladder fill up before we can leave.

Scene III: Two days later, Boston Children’s Hospital Urology Department. We’re sitting knee to knee with the pediatric urologist in his cartoon-covered scrubs and clogs. He’s telling us that from the waist down our baby is inside out. He’s explaining the treatment: I hear surgeries–lots of them, traction (a month??), no guarantees, diapers, no sports, no sex? Or we can terminate. My head snaps up. What does that mean? He says we have two weeks to decide, by law.

Scene IV: Same week, in our psychiatrist friend’s office. After listening with the same sad expression as every other person we share our nightmare with, he has a different take. We need to do whatever it takes to keep our marriage together. Neither of us can raise this child alone, we will need each other, so whatever we decide we need to be all in. No regrets and no blame.

Scene V: A week later, at home. I am packing up baby books and baby clothes as fast as I can. My ob-gyn has just called with test results. The result of the test would determine what we would do, what we thought we could handle as a couple. Now Iain has taken the phone and she’s giving him a list of clinics and phone numbers.

Scene VI: Three days later, a nondescript office building. It’s the right address, Iain is sure of it. I walk in with Iain on one side and my mother on the other and we’re assaulted by the sight of bulletproof glass, cameras, an armed security guard, and a locked door. He searches our bags and we enter a room full of young couples and another bulletproof booth full of staff. They give us papers to read and fill out. I don’t read them, I hand them to my mother. Over the sound system comes the voice of Eric Clapton. Would you know my name if I saw you in heaven? Would it be the same if I saw you in heaven? I must be strong, and carry on, ‘cause I know I don’t belong here in heaven. The couples turn around toward us with wide eyes as my wails fill the room. The staff rushes us into a spare room and shuts the door.

Scene VII: Same clinic, third day of the procedure. I’m in the recovery room in a recliner sucking on a Jolly Rancher. They were right, today was the easiest thanks to drugs. I feel peaceful. With my eyes closed I realize there is someone in the recliner next to me. She’s crying quietly and I’m suddenly worried that she’s alone and maybe she doesn’t have any drugs. With my eyes still closed I reach out my hand and feel for hers. She lets me take it.

Scene VIII: Two days later, Brunswick, Maine. Iain and I are on our hands and knees digging a hole at the site where we got married earlier in the year. I had to bury something, so in the hole we place a box containing the journal I kept for the baby, the ultrasound photos of his profile and some fur from our dog to protect him, from what I don’t know. 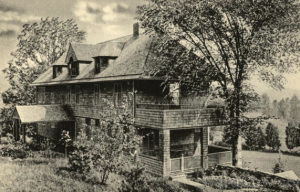 Scene IV: December 31, 1999, Naulahka, Brattleboro, VT. Our friends have invited us to spend New Years with them at the historic home of Rudyard Kipling where he wrote the Jungle Book, full of overstuffed leather furniture and giant fireplaces. They won the place for the holiday in a lottery and they have invited us and two other couples to celebrate with them. We can’t believe anyone wants us around but they insist that we don’t have to do anything; they just want to look after us. Our friend shows us to our room. “This is the only room with a double bed, and since we all have kids, its yours.” She shuts the door on us.

Scene I: Nine months later, 5 am in our bathroom. The contractions have started again so I get up before Iain and my parents. I shower, do my hair and makeup. A photographer friend is coming to the birth.

Scene II: Later that evening, Labor and Delivery room. We have a birth plan. We will be hypnobirthing. We’ve trained with the hypnobirther, I’ve practiced, I have my tapes, my aromatherapy, and we are ready. But the baby is not coming fast enough for the doctor (has she not read my plan?). She assures me that if she breaks my water, it won’t affect the pain, everything will just go faster. I let her puncture the water balloon inside me, there’s a pause and then with a gush of water it feels as if a boulder has slammed into my cervix. I turn to whoever will listen and say, “I need an epidural now.” The doctor leaves.

Scene III: An hour later, the shower. I’m on the floor of the shower. The nurse, who has read my birth plan, has coaxed me in here to try and fulfill my wishes. Iain is on the other side of the glass, smiling, yelling encouragement. I can’t hear any of it through the running water and the pain. I yell back, “I need an epidural!” He keeps smiling and yelling as the glass fogs up.

Scene IV: 8:30 pm, in the hospital bed with an epidural. I am holding Dylan. She wouldn’t let us know if she was a boy or a girl until now, but she would be Dylan no matter what—“from the sea” in Welsh. The photo taken at that moment shows me half naked with a Brillo pad of frizzy damp hair, makeup gone, and Iain brushing my teeth for me. I also now own a hundred photos of my privates in various stages of birthing, because that turns out to be what my photographer friend was most interested in.

Scene V: The next morning. Iain has arrived with his camera. In the car ride on the way to see us U2 came on the radio. It’s a beautiful day, sky falls, you feel like it’s a beautiful day. Don’t let it get away. It’s just the three of us and the morning light is coming through the window. It looks like this:

4 thoughts on “The Do-Over”