It became apparent a few months ago that something was missing from my series of portraits of Dylan. There was nothing of present-day Dylan. As I looked through my photos of her, I realized there was a major drop-off when she hit the teen years. Why? The photos were on her phone, not mine.

A couple of years ago, car rides started to get weird. In the middle of our conversations I would notice her contorting her face into her phone over and over again. What was this new obsession with photographing herself?? Snapchat. In order to converse with another teen a “selfie” was needed. I gave this new technology weeks before the trend would crash and burn as teens tired of snapping a photo of themselves hundreds of times a day.

They haven’t tired. They have perfected it as an art form, and I have a new appreciation and fascination for their creativity. I asked Dylan if I could go through her selfies and the one that jumped out at me was a “throw-away,” an experimental shot in her bathroom with strands of freshly cut hair covering half of her face. “Dylan Selfie” is now finished and ready for my upcoming show “Dylan: A Childhood in Portraits,” after which it will live on the wall of her bedroom.

It occurred to me that if Dylan had this treasure trove of images on her camera, what else was out there that I could use for inspiration? We spent an evening digging through her Instagram and I had my answer.

The first in the series is “Jared.” His selfie is in his bedroom with dirty laundry on the floor but taken from above with a bright and confident expression. I’ll be using colored pencils in a bold, painterly way to capture the intensity and colors of the scene. I’m excited by the variety of styles and moods of the selfies we found so stay tuned to see who’s up next. 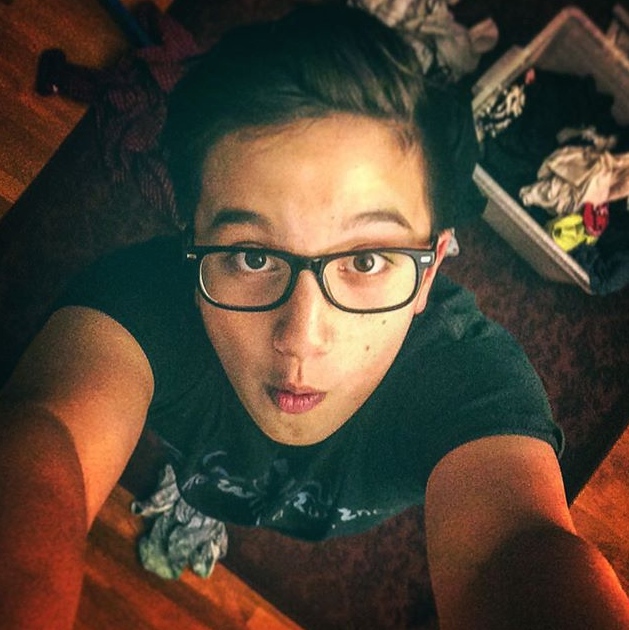